The Favorite: A Terragem Story

Life as a card was pleasant, but sometimes I couldn’t help but feel anonymous — who really cared about a lonely Terragem?

Max’s finger brushed my edges before attaching me to the center hero. The board was stacked. We were gonna win.

“So, what’s your favorite gem?” Max asked our opponent. The question was really a taunt: a distraction for Steve who gloomily eyed the board. Gem Blenders is a war of attrition, a card game where players take turns using powerful action cards and unique blends to dominate their opponents. Gems, like me, are supporting cards, used as resources to empower other abilities. But as things stood, not even a three-star Weaponize could save Steve.

“Well, I’m not sure how I’m gonna take this one…” Steve offered after some thought, and they began to pack up.

“Yeah, your Dread Blader was devastating that game. Once you got your engine going man, you couldn’t be stopped,” Steve said. Max grinned. 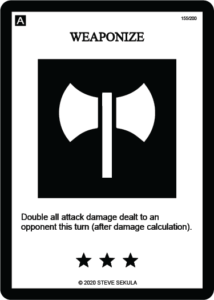 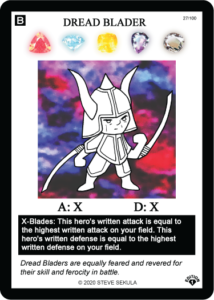 “So, what really is your favorite gem?” Max asked again.

“Definitely Luciogem is up there. But your Caprogem discard synergy that game was insane. Always love good Caprogem synergy. What about you?”

I watched expectantly as Max gave it some thought. Surely, I was his favorite gem.

“So, definitely NOT Terragem…” Max responded with a laugh. I couldn’t bear to listen to the conversation any longer.

The next thing I remembered was the bustle of the subway and the feel of the hot subway air as I inexplicably slipped out of Max’s bag onto a subway seat.

Perched on the edge, I watched as the coming and going of people lessened and the night grew later. I wondered if Max was going to come back for me.

Then, at the dead of night, with the subway car empty, a young man entered. He must have been mid-twenties. With slicked back hair and a button down shirt that revealed more of his chest than I ever wished to see, my first thought was that he was going on a date. But his gait told a different story. He slumped into the car as if his mind was dragging his body behind it, and after a few moments I noticed streaks under his eyes as if he had been crying.

He spun himself around on the pole of the subway before crumbling into a seat — my seat. I let out a sigh, as his behind blocked my vision.

I had been rejected once already that day; I didn’t need to be sat on as well. But after a few moments, he realized he was sitting on me, and the young stranger shifted into the adjacent seat, eyeing me suspiciously.

“Yo… what the…?” The words tumbled out of his mouth. 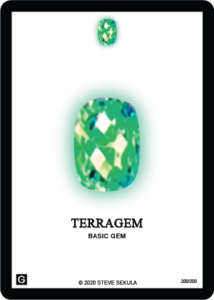 “Are you some sort of bad omen or something because like I need a second bad omen to cancel out all the crap that’s gone wrong in my life already.”

The stranger picked me up and flipped me around, as if he was looking for a secret compartment. But I’m an ordinary card, no special tricks. His eyes narrowed.

“You know, I’m not sure if I want to remember this evening or forget it ever happened,” the stranger wondered aloud.

I also wondered the same.

“I could take you with me, as a token of… remembrance… a pocket monument to my self-pity,” he offered rather profoundly. “But you’re lost like me.”

He read the text on my front aloud. “Gem Blenders, huh… Maybe there are others like you. And if you have any chance of being found, maybe it’s best if I leave you where I found you.”

“How often do they clean the subways anyway,” he said with a laugh. “This is my stop, c’est la vie, little card friend.” The stranger spun himself around on the subway pole again before exiting the train; I detected a warmth in his eyes as he bid me farewell. I felt special.

Max found me the next morning; it turns out they don’t really clean the subways all that much. And it didn’t take long before I was back in action.

At a playtest, a few weeks later, I saw my stranger from the subway. He must have found the event online. As he introduced himself to the other players, I felt that longing again to be seen — to be his favorite. But he didn’t even give me a glance. Maybe he didn’t even recognize me.

But that was ok; I recognized him.

1 thought on “The Favorite: A Terragem Story”